Alan Hahn Oct 16, 2021 Alan Hahn
Playing in the “Basketball Mecca” of Madison Square Garden, the New York Knickerbockers are a team steeped in history. With origins dating back to 1946 in the Basketball Association of America, the Knicks were a charter member of the NBA and have boasted a long list of all-time great players, from Harry “The Horse” Gallatin to Walt “Clyde” Frazier and Bill Bradley, Patrick Ewing and John Starks, to current stars Carmelo Anthony and Amare Stoudemire, as well as such legendary coaches as Red Holtzman and Pat Riley. The legend of the New York Knicks has been enhanced by several heated rivalries over the course of the team’s history: from Bill Russell and the Boston Celtics in the late 1960s, to 1990s battles with Michael Jordan and the Chicago Bulls, Reggie Miller and the Indiana Pacers, and Alonzo Mourning’s Miami Heat. Today, as the Knicks emerge as a team on the rise, these Eastern Conference rivalries are fierce once again. New York Knicks: The Complete Illustrated History presents the full history of this storied franchise, with all the on-court feats and off-court exploits of the orange and blue. Profiles of the top players and coaches from the team’s history, along with a rich collection of photography and memorabilia, create the ultimate, authoritative celebration of a beloved basketball team. 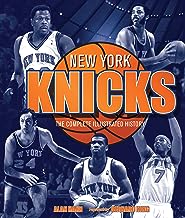